Welcome to the Krell laboratory.

A catalogue of signal molecules that interact with sensor kinases, chemoreceptors and transcriptional regulators

We have compiled a catalogue of 1750 interactions of signal molecules with the three major super-families of bacterial signal transduction proteins, namely sensor kinases, chemoreceptors and transcriptional regulators. These proteins recognize signal molecules typically at their sensor or ligand-binding domain. Data were extracted manually from about 1200 articles and the protein data bank. This catalogue contains 811 proteins. Importantly, only data showing direct interactions were considered and indirect evidence such as in vivo gene expression in the presence of signal molecules were not included. Proteins were classified according to the Pfam family of their respective sensor domains into 127 groups. This work reveals the signal binding characteristics of a large part of bacterial sensor domains. Whereas some sensor domains showed significant promiscuity in signal recognition, other domains were found to possess a well-defined signal profile. The lacking knowledge of the signal molecules that active bacterial signal transduction systems is a major bottle neck in microbiology and this work will facilitate the identification of signals that bind to homologous but uncharacterized sensor proteins. 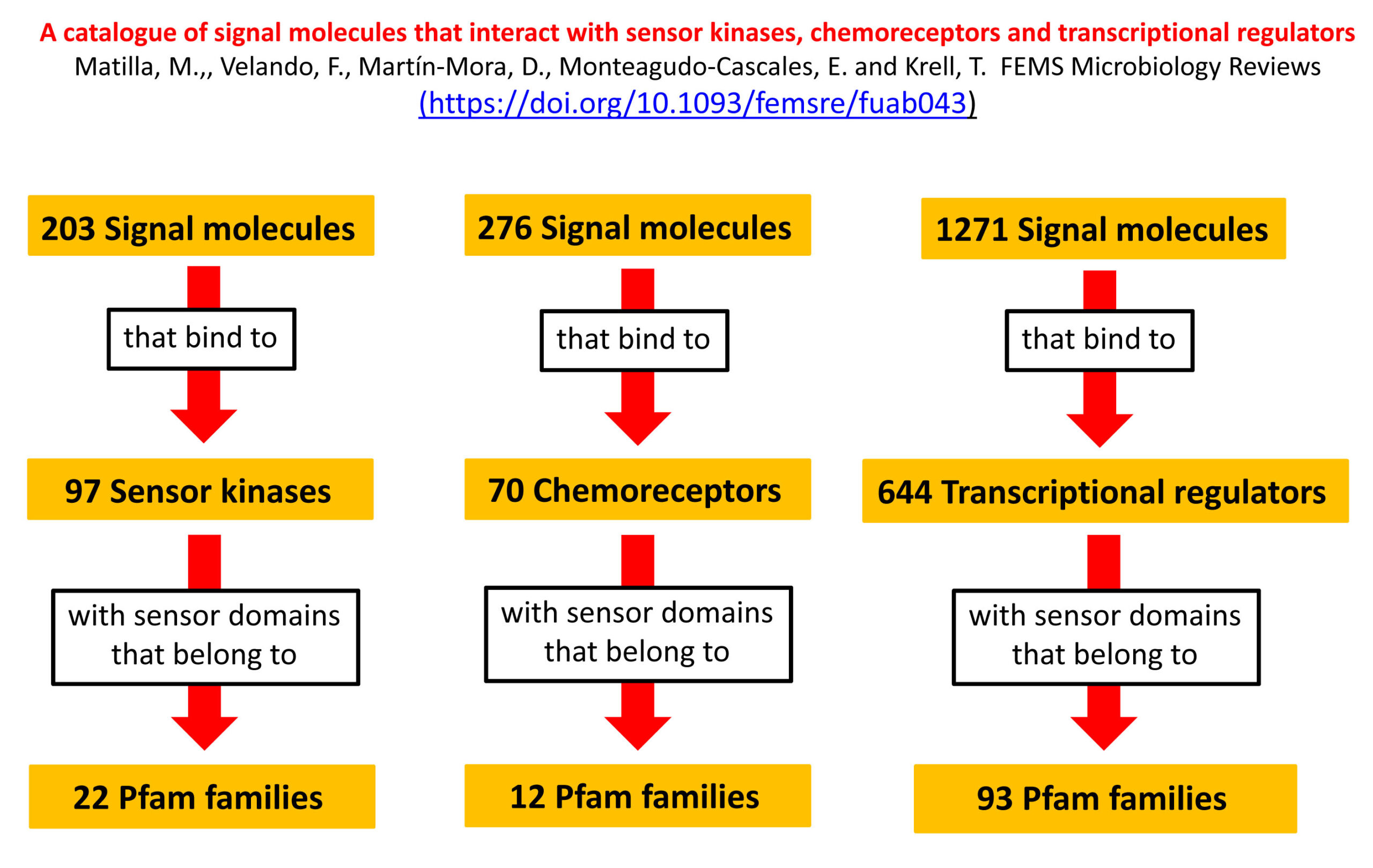 Pseudomonas aeruginosa has 26 chemoreceptors that stimulate in total four different chemosensory pathways. These pathways differ in function: The che pathway mediates chemotaxis, the wsp pathway modulates c-di-GMP levels, the chp pathway is associated with type IV pili based motility and cAMP levels, whereas the function of the che2 pathways is unknown. To some extent all pathways are involved in virulence. There is now a large body of information available on these pathways making P. aeruginosa a convenient model organism. We have reviewed these data and hope this is of help to the scientific community. 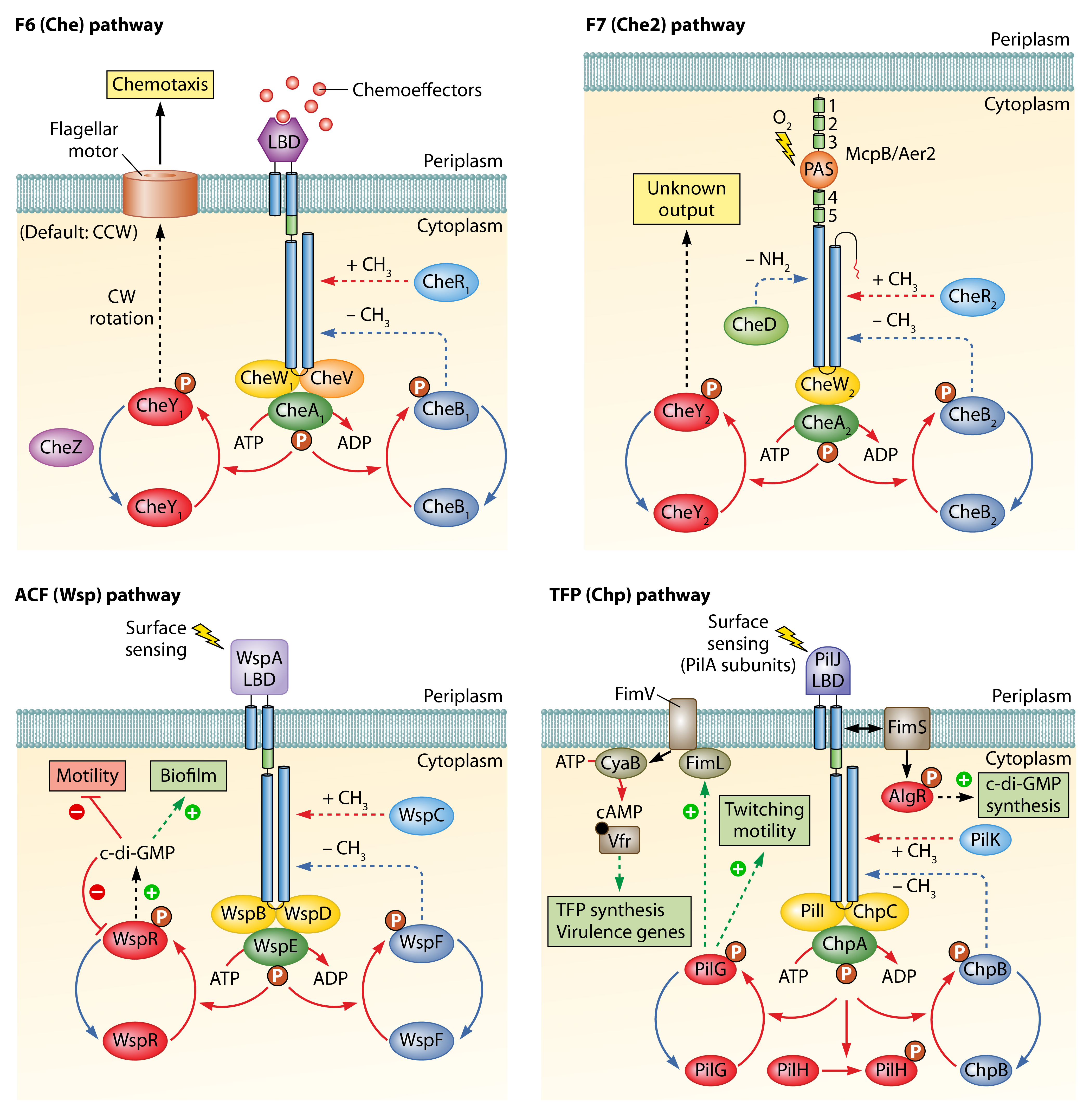 Many bacteria possess a large number of chemoreceptors that each respond to different signal molecules and frequently genomes contain paralogous receptors that have arisen by gene duplication. We have studied chemoreceptor evolution using the three paralogous receptors PctA, PctB and PctC of Pseudomonas aeruginosa as examples. Whereas PctA is a broad range receptor that responds to most proteinogenic amino acids, PctB and PctC recognize preferentially L-Gln and GABA, respectively. In a stimulating collaboration with the laboratory of Igor Zhulin (Ohio State University) we show that pctA gene duplication in the common ancestor of the genus Pseudomonas led to pctC, whereas pctB originated through another, independent pctA duplication in the common ancestor of P. aeruginosa. The 3D structures of the ligand binding domains of these three receptors in complex with several ligands were solved in an excellent collaboration with the laboratory of Jose A. Gavira and reveal the structural basis for differential ligand recognition. 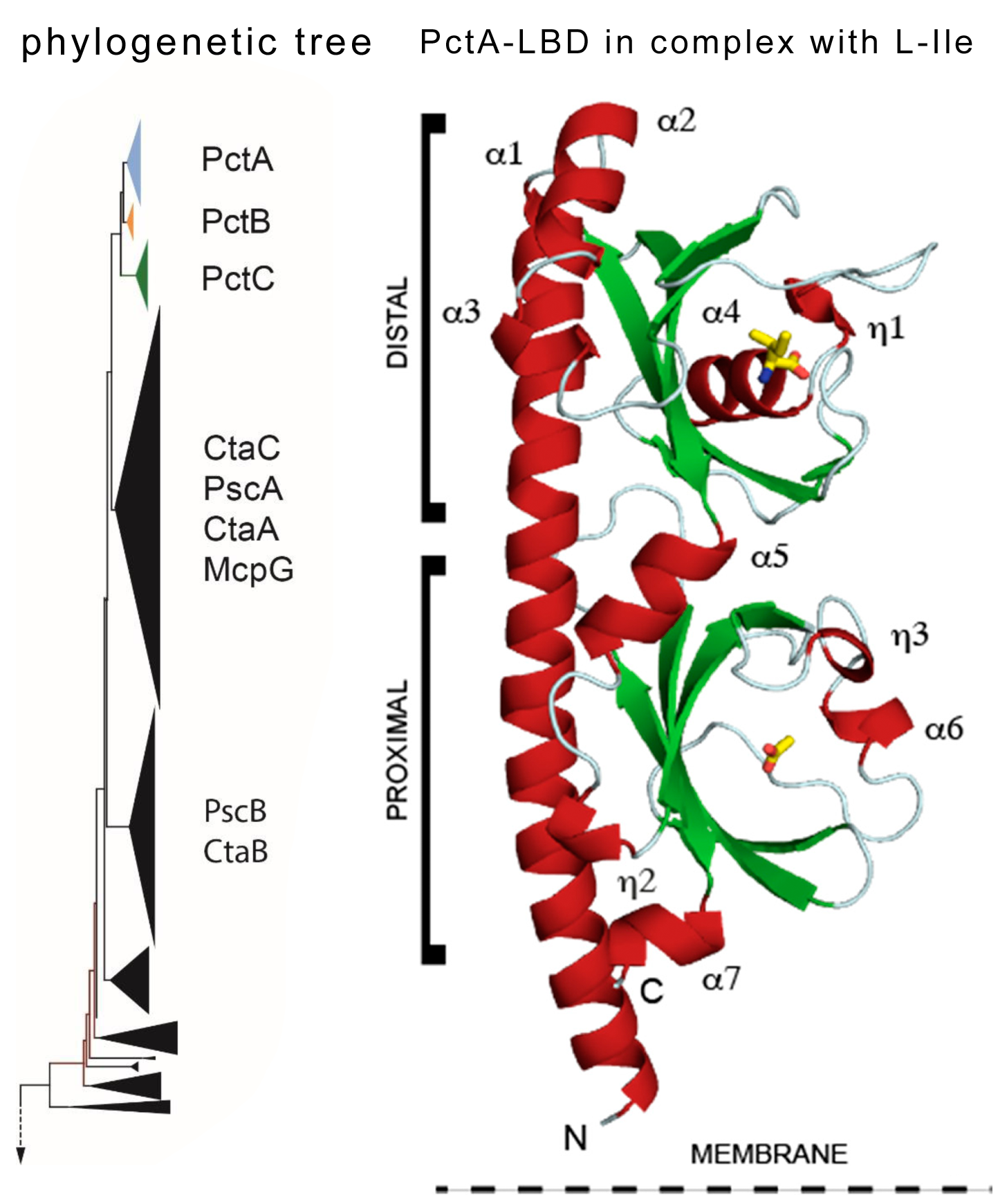 Identification of the molecular basis of nitrate chemotaxis

Nitrate is of central relevance in bacterial physiology and it is known for a long time that many bacteria are able to perform taxis towards nitrate. So far, data suggest that these movements are based on energy tactic mechanisms in which metabolic consequences of nitrate metabolism are monitored. In this article we report a mechanism for nitrate chemotaxis that is based on the specific recognition of this ligand by the periplasmatic PilJ-type sensor domain of the McpN chemoreceptor of Pseudomonas aeruginosa. Nitrate chemotaxis occurred only under nitrate limiting condition, an observation that is most likely due to the nitrate-mediated reduction of mcpN transcript levels. We report the 3D structure of the McpN sensor domain in complex with nitrate at a resolution of 1.3 Å in which one nitrate molecule was bound at the dimer interface. McpN homologues were identified in many bacteria and were particularly abundant in species that couple sulfur/sulfite oxidation with nitrate reduction. Nitrate chemotaxis is likely to be a widespread phenomenon with importance for the life cycle of ecologically diverse bacteria. 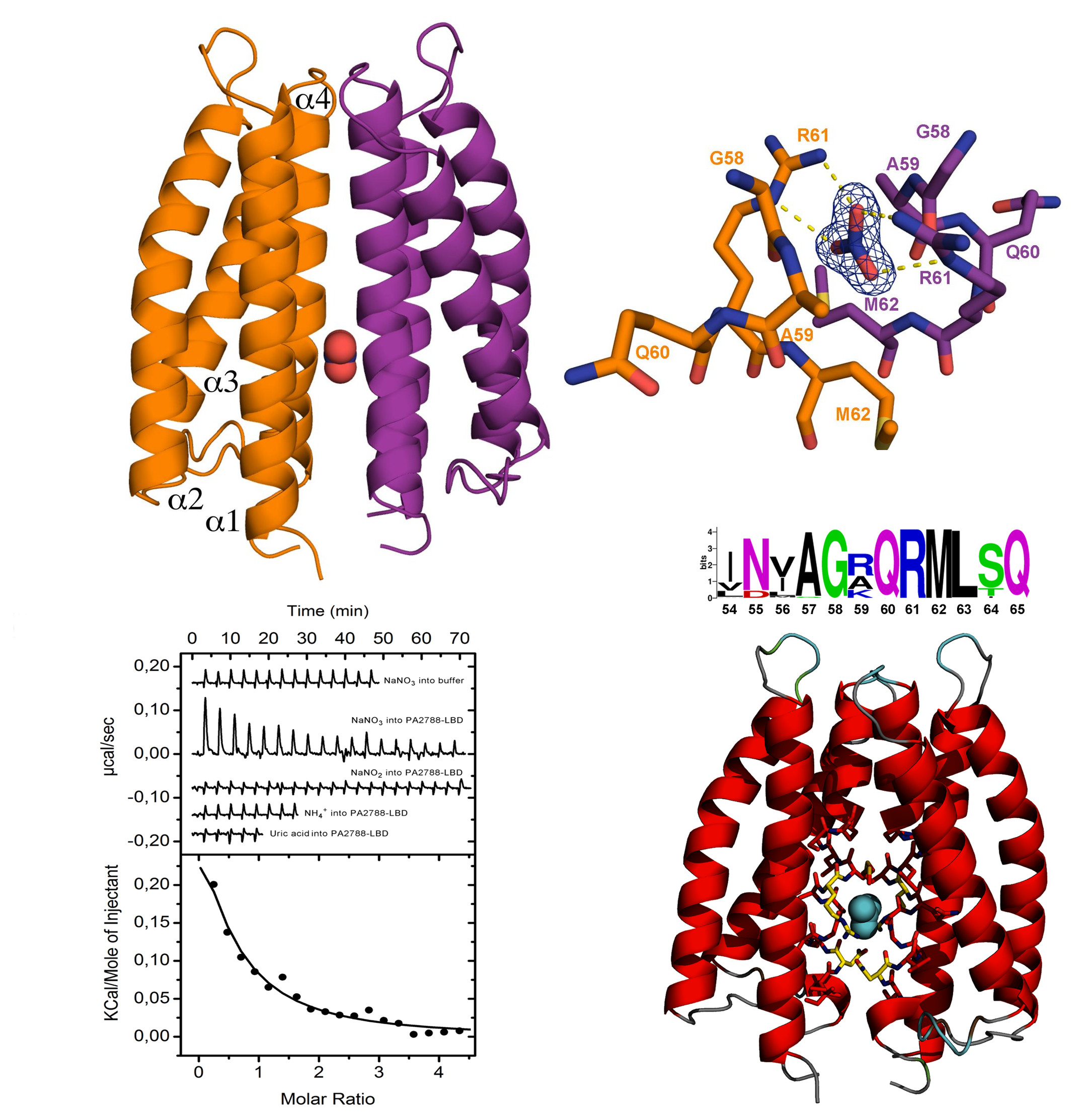 Antibiotics production is costly to the bacterial cell and therefore in many cases subject to strict regulation. However, there is limited knowledge on the environmental cues that control antibiotics production and their corresponding mechanisms. The transcriptional regulator AdmX of the plant-associated bacterium Serratia plymuthica A153 was shown to control the synthesis of the antibiotic andrimid. AdmX contains a ligand binding domain of which we speculated to bind environmental signals that modulate its activity. Using high throughput approaches and purified protein we screened some 1700 compounds for binding and identified the auxin indole-3-acetic acid (IAA) as ligand. Antibiosis assays showed that IAA reduces andrimid production in a dose-dependent manner leading to undetectable andrimid production at 400 µM. AdmX was shown to control the transcription of the genes encoding the biosynthetic andrimid cluster. IAA is produced by plants and bacteria, and our study shows that the synthesis of IAA by other plant-associated bacteria results in the inhibition of andrimid production, suggesting that IAA bacterial production corresponds to a mode of inter-species communication. 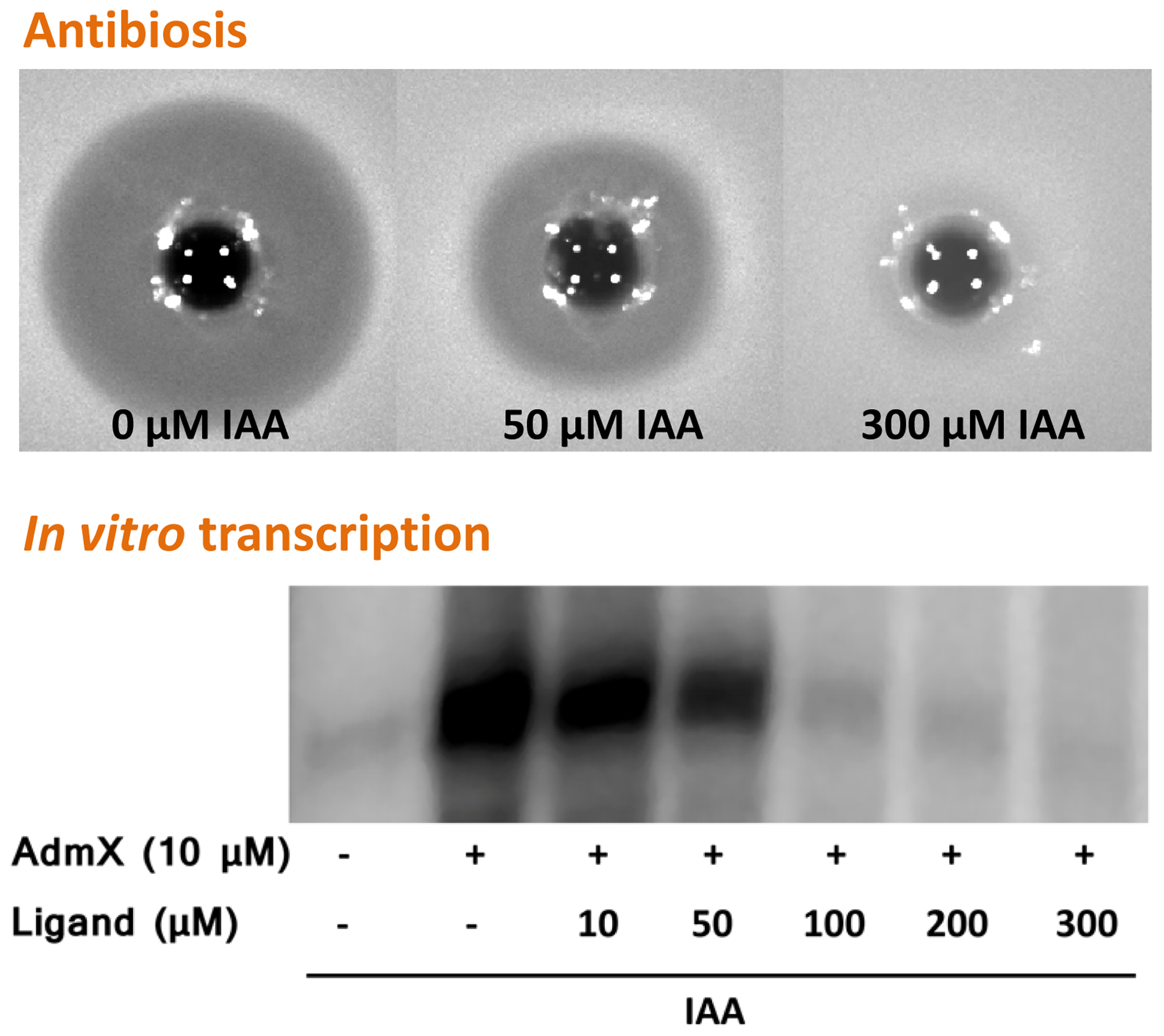 This work provides groundbreaking insight into environmental signals that control antibiotics production and has been published as Matilla et al. in Nucleic Acids Research.